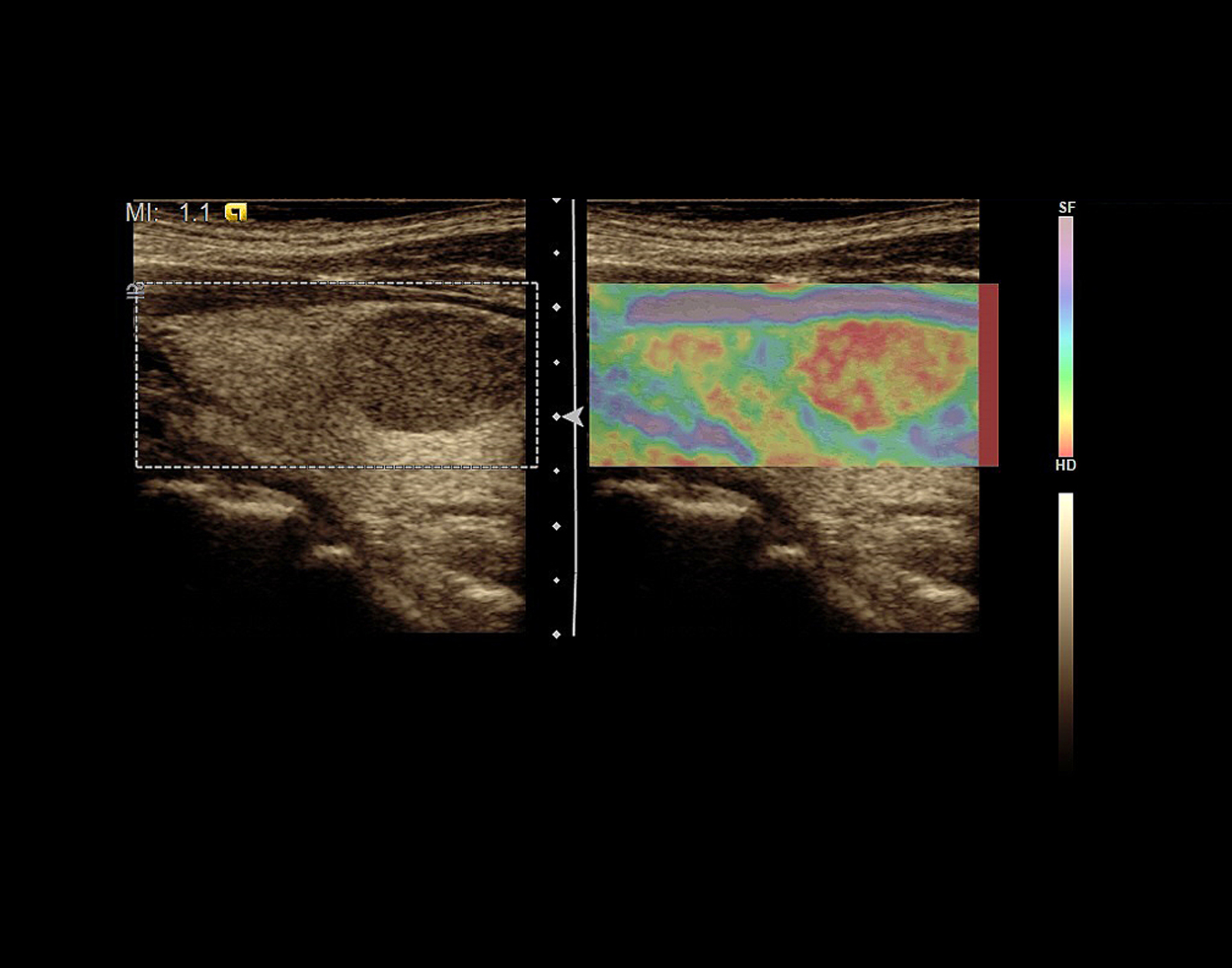 Getting to know Elastography

The procedure for a standard ultrasound has become common knowledge over the years thanks to its wide-range of uses. During an ultrasound, a jelly-like substance is applied to the designated area while a transducer probe is pressed against the skin, the process producing an image of the tissue underneath on the monitor.  These images are then interpreted and applied to diagnosing or monitoring a patient’s condition.  In recent years, new developments have been made in the ultrasound field expanding on and improving how this technology can analyze tissue and generate more in-depth images.  One such development is known as elastography. Elastography is a new and promising technique for the detection of thyroid malignancy. This technology has the potential to become part of the standard thyroid ultrasound examination. We are very excited to offer this technology in our office.  Elastography evaluates tissue stiffness and can be very useful in the prediction of malignancy. It is known that malignant lesions tend to be stiffer, or harder, than the surrounding tissue.  Benign lesions tend to have the same or less stiffness then the surrounding tissue.  Conventional Ultrasound exam is not capable of detecting such abnormality that could otherwise be missed.  There are two methods for determining stiffness: Strain Elastography and Shear Wave Elastography. Strain Elastography is the manual compression of the targeted tissue or nodule using the probe to produce an image referred to as an elastogram.  The process of compressing, or pushing down, creates displacement in the targeted tissue meaning it will move in response to the pressure.  Imagine a rubber ball, something like a soccer ball-if the ball is at its maximum pressure when you push your palm into it, the rubber hardly moves.  However, if the ball has lost some of its air over time, the rubber will give way much easier underneath the force of your palm.  Strain Elastography is very similar to this in that the pressure emitted by the probe will cause the elastic tissue to move more as opposed to the harder tissue. The movement of the tissue is then measured and visualized on a color map. Shear Wave Elastography uses acoustic push pulse from the probe to create a wave that travels perpendicular to the direction of traditional ultrasound waves.  This technique is similar to ripples in a pond in terms of the effect on the area being analyzed.  As the rock used to create ripples sinks to the bottom (traditional ultrasound waves), the ripples move outward over the area (shear waves).  With this method, speed is being evaluated so the stiffer the tissue, the faster the wave will travel over it.  The wave is tracked, measured, and given a numerical value of the shear wave speed. The tissue stiffness is then depicted on a color map. The different colors represent the different tissue densities. Our color map uses the color red to represent the hardest tissue and the color blue to represent the softest tissue. Using Shear Wave Elastography can be more accurate than Strain Elastography because the results are represented as numbers and not just colors. 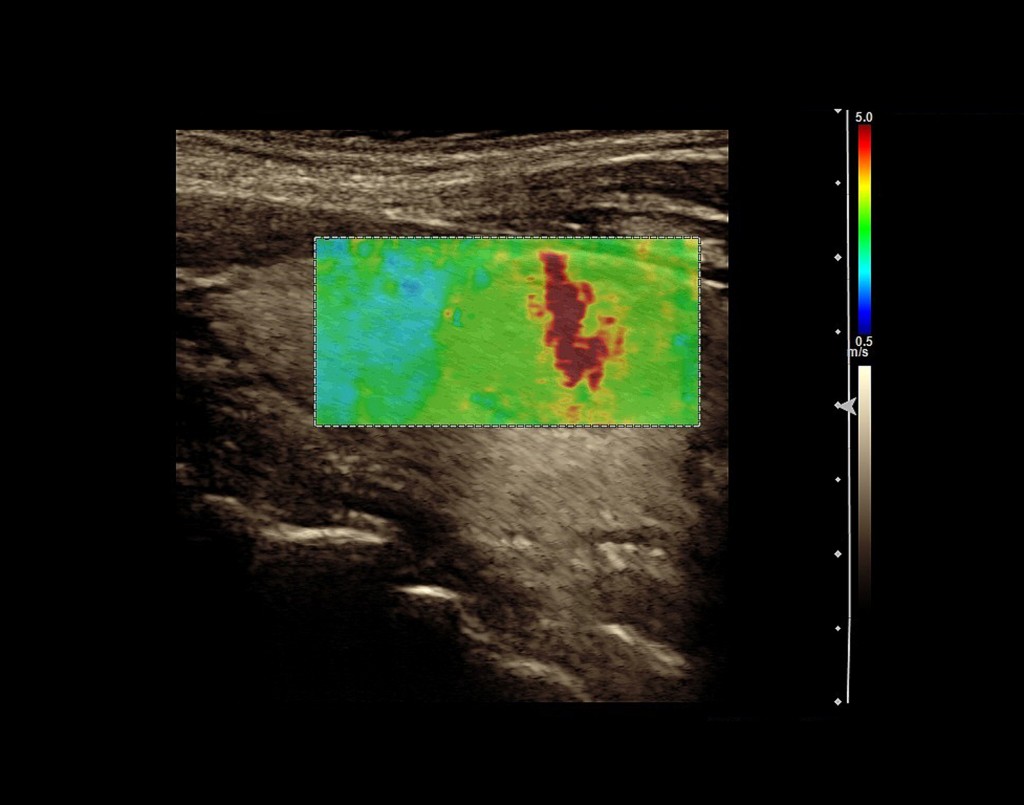 How does this relate to the thyroid field?

Both methods of elastography can be used when assessing the density of nodules in the thyroid.  A recent study performed by Wilmington Endocrinology revealed the use of Strain Elastography to help assess the risk of cancer in thyroid nodules. In the study, 912 nodules were analyzed in 706 patients.  Using a combination of high resolution ultrasound technology, Strain Elastography, fine needle aspiration biopsy (FNAB), and tissue pathology, the study concluded that the stiffest tissues tend to carry the greatest cancer risk.  The nodules were also examined for size, height, blood flow, location in the thyroid, and calcium presence.  It is important to remember that multiple factors contribute to a diagnosis – a single method is not used. A firmer thyroid nodule is not always cancerous.  The study demonstrated that, in retrospect, patients who were diagnosed with malignant nodules happened to have certain elastic characteristics in common as well.  This has provided some indicators that can be used in future elastographies to determine the next steps in a patient’s treatment. Strain and Shear Wave Elastography have proven to be useful tools in evaluating thyroid nodules, both operating alone and with typical ultrasound technology.  The detailed readouts from these ultrasounds have aided in the treatment and subsequent diagnosis of a patient.  The correlations found between particular colors and speeds from these methods with the eventual conclusion of malignancy risk are just another way patients can be assured their condition is being treated to the fullest extent.